50 years ago in 1972, WEL first issued a challenge to the major political parties: do the right thing and act to ensure equality and justice for all women. In each of the 17 Federal elections since then, WEL has held politicians to account by advocating for policies which tackle gender inequality and by assessing their actions rather than their words through our election scorecard.

WEL’s Federal Election 2022 scorecard assesses the main parties’ commitments against WEL’s top priorities which you can find here. We have selected the top priorities from each of our 12 policy areas: First Nations Women and Girls; managing pandemic impacts; managing climate and environmental crises; a decent income and equal secure work; ending violence against women and providing secure, affordable housing, universal free childcare, accessible reproductive health, equal representation of women in work and public life and equity in education and training.

How do our main political parties stack up? 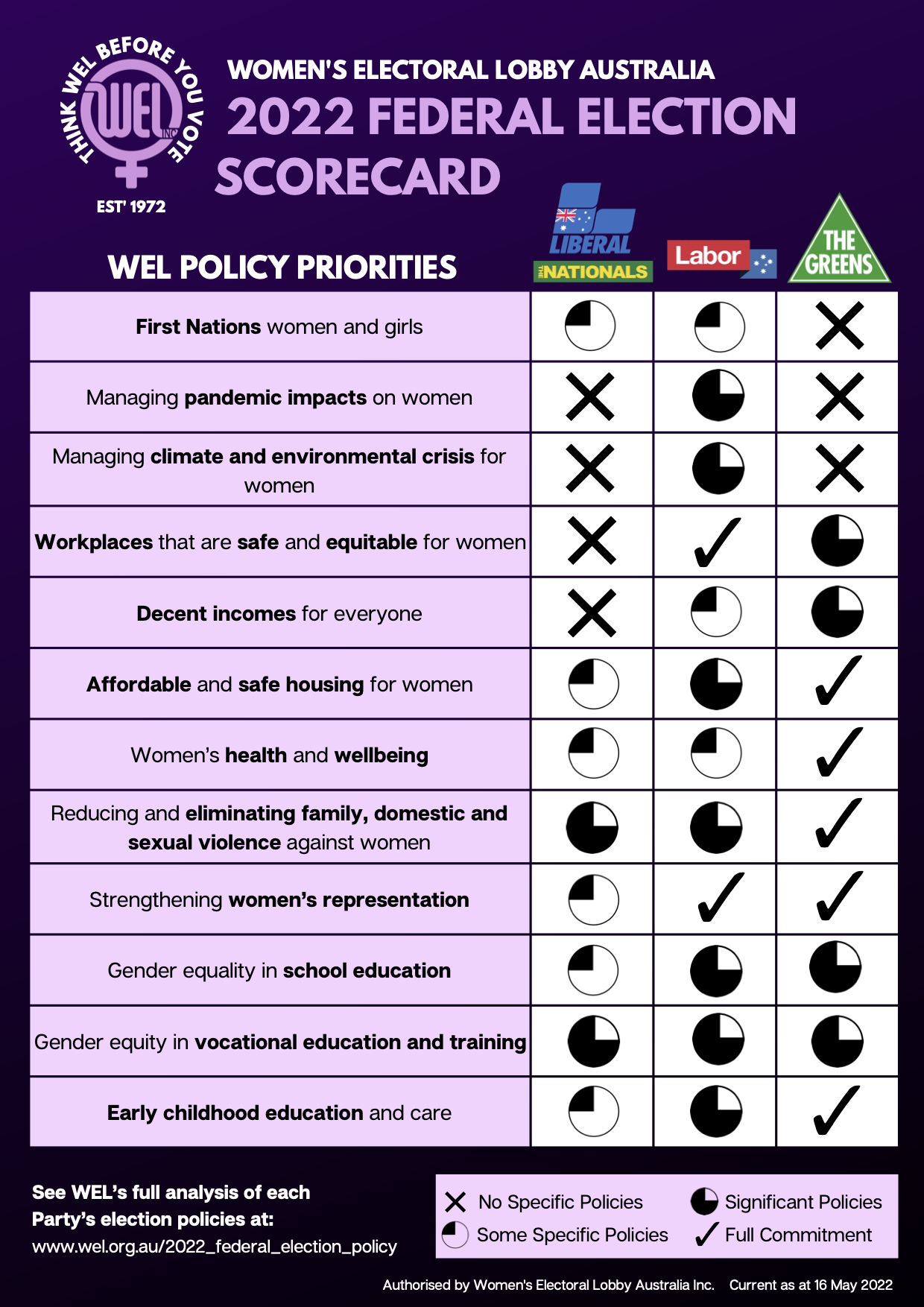 In every election since 1972, WEL has lobbied key politicians to adopt policies aimed at achieving fair and equal outcomes for all women. For this year’s Federal election, WEL launched a campaign which included: developing a comprehensive policy platform setting out a program for achieving social justice for women; lobbying political parties to adopt these policies, and developing a Scorecard to assist voters in deciding which party has the best policies for women.

Post-election, we’re interested in getting your feedback on our campaign and what we could do to increase the effectiveness of our lobbying. We’d appreciate your response to our short survey which you can find here.

Our WEL 2022 policy platform offers political parties a thoroughly researched and comprehensive program for a better Australia, one that will benefit women, families, communities and align the direction of the economy with social well-being.

We released the full policy platform in February this year and provided it to party leaders, Ministers, Shadow Ministers and party spokespeople.

WEL is continuing to lobby key government and opposition decision makers and influencers to adopt our recommendations.

WEL is excited to present a recording of our online forum ‘How Will Women Vote’ held on Tuesday 10 May.

Joined by Dr Anne Summers, Professor Nareen Young, Dr Cassandra Goldie and Professor Helen Hodgson, four of Australia’s most policy savvy feminists, they put the spotlight on political parties and their candidates’ attempts to capture the women’s vote. Together they discussed what policies are appealing to women voters and how policies such as ours can make a tangible difference to people’s lives while leading to a gender equal Australia.

At the end of 2021, Women’s Electoral Lobby (WEL) undertook a survey targeting its members and supporters to help us prioritise our 2022 Federal Election campaign. It canvassed attitudes towards various gender policy issues and asked respondents to tell us which of those issues matter the most in addressing their lived experiences of gender disadvantages in Australia.

The survey was conducted over three months and its results have informed WEL’s 2022 Federal Election Policy Platform which offers all political parties a comprehensive program to achieve justice and equality for women.

The survey results have highlighted some common and serious concerns facing women in Australia. The responses indicate dissatisfaction, even outrage, at the lack of genuine government responses to these systemic issues.

In particular, women’s safety, such as addressing domestic and family violence, was consistently ranked as one of the most critical issues that need redress, both in our open-ended and follow up questions which explored specific aspects relating to women’s safety issues.

When respondents were asked: “What are the three issues most likely to influence how you vote in the coming federal election?”, women’s safety was listed as one of the top three in 42% of the answers.

96.7% of all respondents said they were either very concerned or that it was very important for the Federal Government to have a prioritised plan to reduce and eliminate violence against women of all backgrounds.

Similarly, 99.5% supported adequate funding for programs under the National Plan to Reduce Violence Against Women and their Children, while 97.1% considered it very important to deal urgently with homelessness resulting from domestic violence.

In total, women’s safety was one of the most critical issues for people filling out our survey.

The availability of social housing was another issue that was ranked as very important by respondents (94%), with a high level of concern that older women represent the fastest growing group of homeless.

The three top issues that respondents indicated would inform their votes as a priority were: Women’s Safety, Women’s Housing Security and Climate Change.

Survey respondents told WEL: “As to the election, I am looking for leadership and transparency of government” and that “climate change, respect for women and integrity” were three clear voting priorities this year.

There was clear frustration at political inaction. One comment offered was: “I want a government that will be committed to the people and their needs, not the self-interest we have endured for way too long”.

The survey results were compiled in early 2022 in preparation for WEL’s launch of its federal election campaign. WEL thanks our many supporters who took the time to answer the survey. We value this feedback as it represents thoughtful responses from people who are engaged and well-informed about the issues and policies that matter.

Campaigns
Campaigns
Join the Women's Electoral Lobby and help change the lives of Australian women for the better.