Help us ride this wave to the next Federal election. Go to Support WEL’s work at the end of this article. 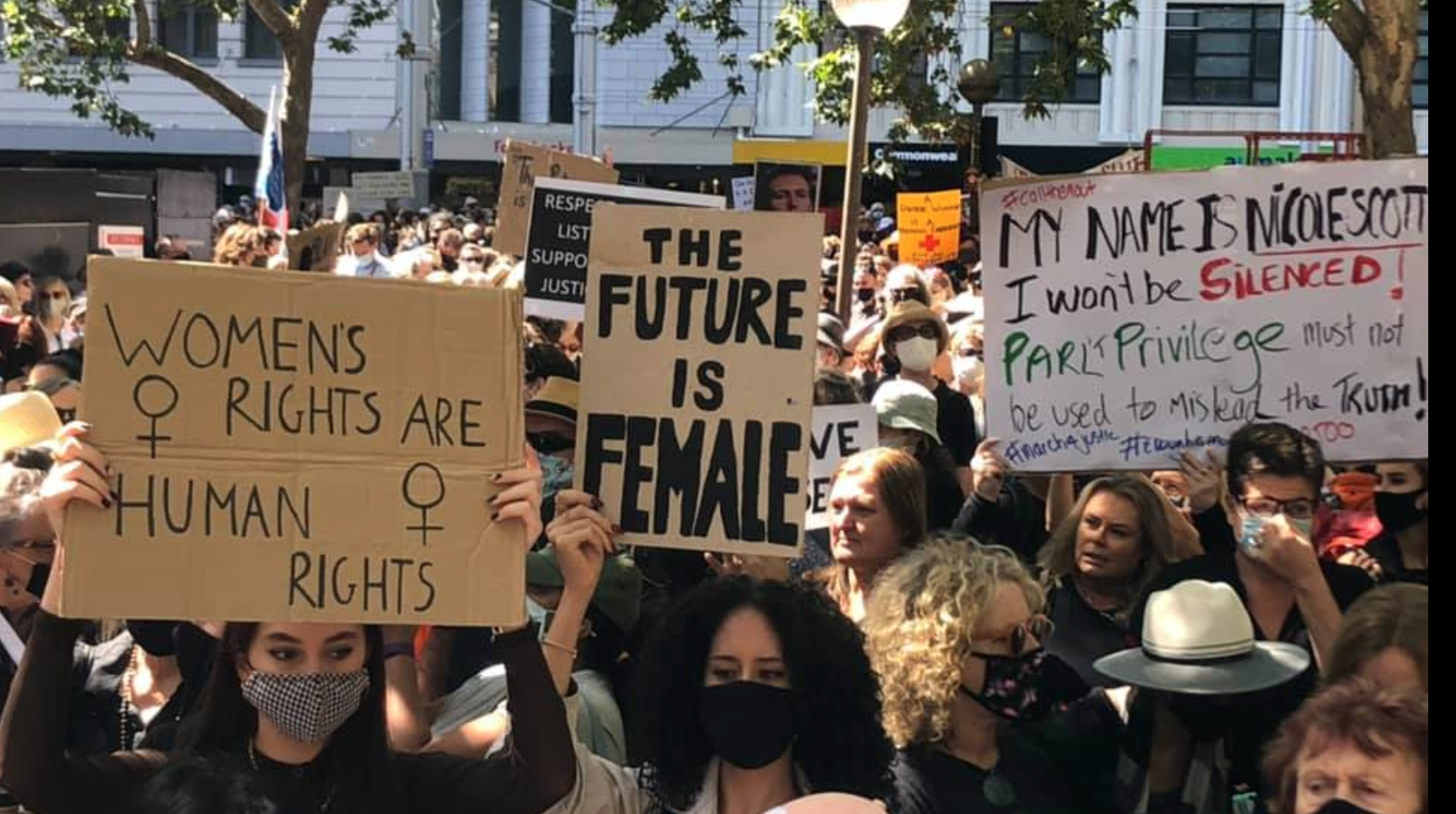 ‘We are inspired by this seismic, intergenerational and diverse feminist uprising.’

The momentous week started with IWD and culminated in the 15 March Women’s Marches for Justice. Australian of the Year Grace Tame’s appearance with the Prime Minister on Australia Day and Brittany Higgins’ February 24 statement on the cover up of her rape in a Ministerial office ignited an extraordinary outcry from Australian women. Over 100,000 rallied against our Government’s utter failure to respond to male violence and sexual assault at work, at home and in our everyday lives.

The National March for Justice drew tens of thousands of people in towns and cities across the country…from Coffs Harbour to Kalgoolie, and all the capital cities. In Sydney we saw more than 15,000 marchers.

The huge rally in Canberra was the political focal point for the nation. Ngunnawal Elder Aunty Violet Sheridan welcomed us to Country. With Wakka Wakka/Wulli Wulli woman from Central Queensland, Dr Tjanara Goreng Goreng, she linked women’s experience of sexual violence with Aboriginal women’s ongoing subjection to the violence initiated through settler colonisation.

There, on the hill facing Parliament House where MPs were sitting inside, Brittany Higgins delivered her measured, damning and illuminating speech watch here.

Back in the House the Government cut off the leader of the Opposition’s attempt to read the speech into Hansard.

WEL is inspired by this seismic and diverse intergenerational feminist uprising. Brilliant and courageous young women dominated the speakers’ platforms around the nation and lend passion and acute analysis to the media reports and commentary. We congratulate the organisers who include lifetime WEL members. You are opening new political possibilities and raising the hopes of all Australian feminists fighting for women’s inclusion in public and private life on equal terms with men.

The uprising has exploded in the face of years of Government resistance to deeply researched and profoundly felt advocacy for women’s equality across every dimension of life. WEL’s work alone has included arguing for our rights to:

Alongside feminist organisations who are our allies and sisters, on March 15 we declared ‘’Enough is Enough’!

Some Australian women are beginning to conclude that the Federal Government does not care about us.  This is starting to be reflected in some authoritative polling read here.

WEL is in this for the long haul.

We will need your help. Our work is voluntary, with pro-bono experts giving unlimited hours. We work in alliance with feminist and expert organisations and in conversation with the political process across the party spectrum. We need to fund research, data bases, professional communications and events reaching out to members, followers and media.

Support WEL’s work for women with a monthly donation HERE.