What does feminism mean to you? 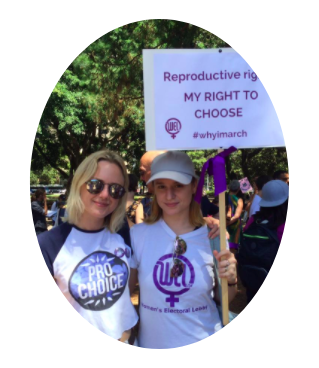 WEL member Cinzia (on the right in image) was interviewed by Luci, a Year 5 student who was tasked with a passion project for school and she chose the topic of feminism. Cinzia, a long-time 'girl power' advocate, has been a member of WEL for over two years, is part of the WEL's social media team, and volunteers on two of WEL’s campaign action groups.

Q. What does feminism mean to you?

I follow the straightforward definition of feminism, the belief in social, economic and political equality of the sexes. The reason I believe in feminism, rather than something like ‘humanism’ or simply calling it equality, is because it directly references the subjugation of women and I don’t believe you can move towards fixing a problem if you cannot even name it.

The definition of feminism has changed a lot over time with different strains of thought and I think the best version we have of it today is intersectional feminism, the view that women, and people, experience oppression in different ways and to different degrees. These patterns of oppression are interrelated and bound together. For example, if a woman is also a person with disability, or not heterosexual, they face additional kinds of discrimination. Feminism needs to be intersectional to really be applicable to people’s lives, and to begin to dismantle all the different kinds of discrimination and oppression people face.

Feminism is an ideology, an analytical framework, a strategy for social change. It’s the best way for me to think about myself and the world.

Q. How do you feel now that some people think that boys are better than girls? Do you think this is true?

No, I don’t think that’s true at all but I know that we live in a patriarchal society which means that boys/men enjoy more power and privilege than women/other people simply for being male. And because we live in a patriarchal society, that power continues to be concentrated in the hand’s of men which means progress can be difficult because it is not in the interest of those with more power to advocate for equality. Equality would mean those with more power have to give up some of that power which is why is there is a strong backlash against feminism and other movements for social change.

It is frustrating to see women constantly overlooked, disenfranchised, abused and oppressed. Quite frankly, it makes me very angry. A lot of women’s achievements have been written out of history, with men taking credit. However, I also know that with every generation, we make a bit more progress. I only wish it was faster.

Q. And when do you think this issue started (the issue that people think boys can do more than girls)?

Sometimes it feels like it’s always been this way but patriarchy evolved about 10-15,000 years ago. Before then, society was matrilineal (passed through the mother). The role of men in reproduction was not understood so children derived their identities from their mother.

As time went on, the human population rose and it meant more competition for resources, so men fought over territory and the concept of private property grew. With the increased fighting, the concept of controlling other humans also grew. And as humans better understood the male role in reproduction, men needed to control their lineage which meant controlling women and their reproduction.

This is the start of patriarchy, the valorisation of masculinity, the submission of femininity. While some societies are still matrilineal, most are patriarchal and so throughout history, have believed men to be superior for one reason or another. It doesn’t mean it’s true, in fact you and I both know it’s not, but that is how power has worked for a very long time.

Q. How do you think feminism has changed and affected women's rights throughout history?

However, just because we have come along way, does not mean we’re not still fighting for these same rights. It often takes a lot of work just to stay in the same spot.

The concept of equal pay (women earning as much as men for the same work) became law in 1969 in Australia. However, the pay gap (the different between how much men and women make) is still about 17%, so all these years later, even though it’s the law, men are still paid more than women. The gap is even higher for non-white women because they face extra discrimination. Click HERE for the Equal Pay Handbook.

While women are can hold political positions, we are underrepresented meaning there are far more men in political positions than women, even though women are half the population. After the 2016 federal election in Australia, only 32% of representatives were women. This means our interests are not properly recognised or advocated for. See the gender composition of the 45th Australian Parliament.

I guess the point I want to make is that even though things have changed, there is still a long way to go and we can never take our rights for granted. They must always be fought for.

I don’t think we can begin to address the structural inequality in our societies unless we first recognise what they are. That is what feminism does, it understands and recognises that women, and many other people who are not privileged by a patriarchal society, are oppressed. Often when people say that they don’t believe in feminism but instead believe in ‘equality for everyone’, it’s because they don’t want to admit their own privilege because true equality means they have to lose some of that privilege.