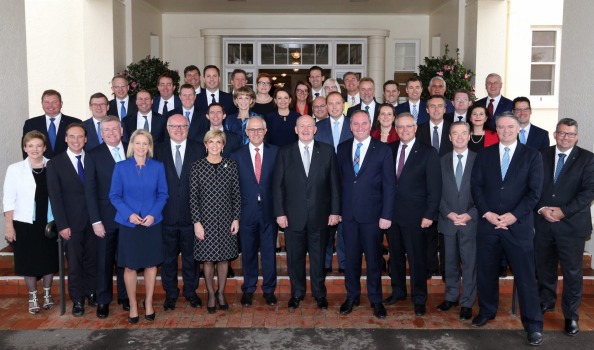 The number of women elected and given ministerial positions is underwhelming. Of the 41 Ministers in the photo above, only 10 are women.

"Mr Turnbull's acknowledgement that gender inequality contributed to the culture of domestic violence and lack of respect for women in Australia was more reason to seek gender equality in the public sphere...The lack of women in government seats is particularly shocking and nowhere near good enough from a party that says it is committed to ending gender-inequality that leads to domestic violence," - Melanie Fernandez, Chair, WEL Australia in The Sydney Morning Herald article, House of Unrepresentatives: Female Coalition MPs at lowest level in two decades.

'Despite more women being preselected and on the tickets, this government and cabinet still has a historically low number of women representatives... less than 25 per cent of the Government ministry will be women. Just over 40 per cent of the current Shadow Ministry and around 50 per cent of the Greens senior positions are held by women.' - Jane Gilmore, Comment for SBS Where are the women? Why more female candidates hasn't led to more women.