50 years ago in 1972, WEL first issued a challenge to all political parties: do the right thing and act to ensure equality and justice for all women. In each of the 17 Federal elections since then, WEL has held politicians to account by advocating for policies which tackle gender inequality. Our ‘election scorecard’ has offered guidance to women at each election on how to vote most effectively to achieve change.

We never give up.

But this coming election the stakes are higher. In March 2021 tens of thousands of Australian women expressed their frustration at the slow pace of change by declaring ‘Enough is Enough’.

Our 2022 policy platform offers political parties a program for a better Australia, one that will benefit women, families, communities and align the direction of the economy with social well-being.

Leading up to the election our scorecard will measure party policy announcements against each of the policies on our platform: a decent income and equal secure work, ending violence against women and providing secure housing, universal free childcare, accessible reproductive health including community controlled birthing, equal representation of women in work and public life and equity in education and training.

Depending on the election date, we plan a launch of the WEL Federal Election Policy Platform with an open letter from WEL and allied organisations to party leaders. The letter will call for them to commit to policies to benefit women, families and communities and make social well-being, equality and justice for women a major goal for the next Federal Government.

We are sharing this platform now with you, our members and supporters, before we publicly launch our campaign.

We invite you to take a look at our full policy platform here.

As a WEL member and supporter you already know we have always relied on donations and voluntary expert contributions. This campaign will be hard fought and we must give it our best. We ask you to make a donation to WEL here or become a regular donor here.

The Morrison government was forced to abandon its Religious Discrimination Bill when splits within its own ranks, a fragmentation amongst the Bill’s more extreme proponents and deft parliamentary tactics by non-Government members doomed it to defeat.

In the first sitting week of the NSW Parliament, One Nation’s Mark Latham saw an ignominious defeat of his Religious Discrimination Bill. This Bill mirrored the worst features of the Federal Bill in its negative impacts on women in workplaces, reproductive rights and the rights of LGBTI people.

WEL made four submissions on the various versions of the Federal Bill. On the One Nation Bill in NSW, WEL made a submission and appeared at a Parliamentary Inquiry.

We pay special tribute to Equality Australia’s Anna Brown and Ghassan Kassieh for their expert and generous leadership of the broad coalition against both Bills. Like the vast majority of Australians WEL supports religious discrimination legislation which protects people of faith along the same lines as other protections and does not privilege religious protections at the expense of others.

IWD is celebrated around the world on 8 March and there is a huge range of events being organised around Australia both on the day and in the week before or after this day. Search for an event nearest to you or for some of the online events you might be able to join. 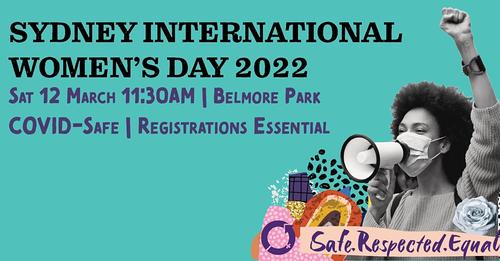 In Sydney, the largest IWD event will be held at Belmore Park, near Central station, at 11.30am on Saturday 12 March. This year, we are marching for the right of women to be:

There will be a march from and back to Belmore Park, where we will hear speeches from inspirational women about how we can win the fight in 2022. After the march, there will be a mini-festival with music, rides and stalls, including a WEL stall.

Join the WEL contingent gathering under the WEL banner at Belmore Park at 11.30 and show your support for International Women’s Day.

WEL depends more than ever on the support of our members and followers, to continue our essential work of lobbying and campaigning to protect the rights of Australian women. Armed with policies setting out our demands, we will mount a campaign that will make women’s equality a key area of contestation during the election. 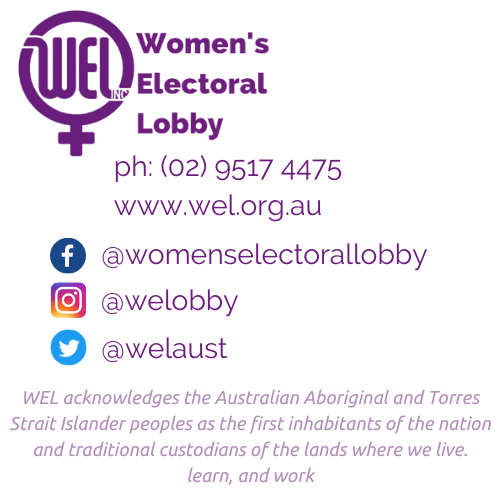