WEL pushes on for Women

Further COVID lockdowns in NSW, Victoria and ACT have once again meant that women are shouldering an undue burden of childcare and housework, are more likely to suffer financial hardship and domestic violence and are acutely vulnerable as front line workers in the retail, care and health sectors. The pandemic has exposed the shocking inequity in the distribution of health services and the health consequences of precarious and inadequate housing, issues on which WEL has long campaigned.

Meanwhile we are working intensively on our Federal Election policies, especially given rumours of an election as early as October/November – an election with very high stakes for women.

Our policies cover violence against women, work, women's health, childcare, decent incomes for everyone, strengthening women's representation, education and training, and housing and homelessness.  In the next few weeks we will circulate a questionnaire to WEL members and followers to identify your policy concerns to help us refine our priorities.

WEL policies will be the foundation for our campaign and for WEL’s famous (and feared since 1972) scorecard, which we will produce closer to the election, rating the political parties on the basis of their published policies.

Please feel welcome to contact us to signal your interest in the work at [email protected] or ring Philippa on 0466273308.

A National Summit on Women’s Safety was part of the Morrison Government’s response to the March 4 Justice.

The Summit is integral to consultations for the next National Plan to prevent Violence Against Women and Their Children.

Women’s advocacy organisations around the country are working feverishly in preparation for the Summit on 6-7 September.  WEL Executive members Dr Jane Bullen and WELA National Convenor, Jozefa Sobski have been closely involved in discussions with other feminist organisations about linking related advocacy strategies into the National Summit process.

You can see the program now on the Conference site.  On September 6 and 7 anyone can register via the site to watch proceedings, including the Prime Minister’s speech.

WEL will participate in the Housing for Women’s Safety Summit on 6 September.

To register for this panel discussion as part of the audience, click here.

That this is to be on the opening day of the Morrison Government’s National Summit on Women’s Safety puts the spotlight on the absence of housing from the Safety Summit’s agenda.

The exclusion of housing from the agenda for the Government’s Women’s Safety Summit flies in the face of calls from the domestic and family violence sectors, First Nations organisations and communities, and the broader community sector to make access to safe and affordable housing a key part of the Federal agenda to improve safety for women. The aim of the Housing Summit is to ensure that access to safe and affordable housing is given priority in strategies to improve safety for women.

WEL has added our logo to the Statement on Women’s Safety, highlighting our concern about the continuing toll of violence against women and the totally inadequate government action to provide safe homes so women and children escaping violence can rebuild their lives.

The Statement was organised by allies, including Everybody’s Home and calls on the Federal Government to address this issue in the 5th National Action Plan by setting a target to end homelessness for women and children, including women fleeing violence, and investing to deliver an adequate supply of new social and affordable housing in partnership with state and territory governments.

WEL remains a vigorous partner in Ageing on the Edge, a coalition of organisations working together towards housing justice for older people on low incomes. Advocacy Lead Dini Liyanarachchi and the coordinating committee (of which WEL is a member) are working to engage with MPs and bureaucrats, do public advocacy in collaboration with people with lived experience and champions/ambassadors, build the evidence base and increase support.  They are scheduling meetings with Opposition, Independent and Government MPs. A campaign objective is to secure a Parliamentary Inquiry into women’s and older people’s homelessness to commence as soon as possible.

WEL’s Women Ageing Well campaign group continues to refine our advocacy/campaign messages, liaising with others in the sector.

The exhibition in NSW Parliament House has now been postponed due to the COVID restrictions. We are working towards new dates for 2022. The activations for July and August in the CBD were also cancelled, and VIVID has now been shifted for the second time, now scheduled for 27 May-18 June 2022.

The good news is that The Chrome Tiny House and Chrome Car are still on display at Pier 8/9 Walsh Bay as part of ArtParks Sculpture Walk. 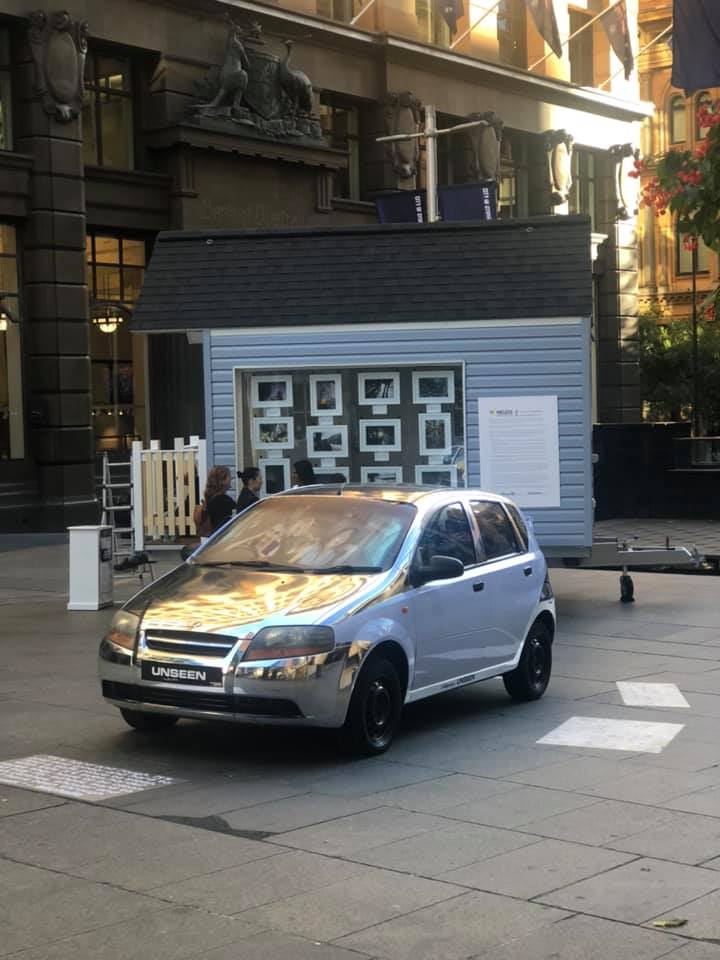 The next activation for the Arts hub at Circular Quay will be 8 November - 5 December, COVID permitting. We are planning to have a market stall where the 25 women who are in the project will be able to sell their arts and crafts. They have been continuing to work on their art even though the public events have been unable to proceed.

As we go to press the Sex Discrimination and Fair Work (Respect at Work) Amendment Bill is being debated in the Senate, with crucial amendments depending on the vote of One Nation Senators.

They have, as one feminist commentator said... ‘crab walked’ back since then.

Contradicting the commitments made in March, this Bill excludes provisions for:

We will update you via facebook and our other socials on progress with the Bill today and tomorrow.

In the little sitting time remaining for the 2021 Federal Parliament, WEL and our allies are still waiting for Attorney General Michaelia Cash to unveil the latest iteration of the Morrison Government’s Religious Discrimination Bill.

See this excellent account of the dangers this Bill poses to women, echoing the warnings in WEL’s 2019 and 2020 submissions on the Bill

Two years after the Treasurer was boasting that Australia was close to closing the Gender Pay Gap, the Work Place Gender Equality Agency announced that Australia’s national gender pay gap has in fact widened, up 0.8 percentage points to 14.2%.

That means women working full-time are now taking home $265.50 a week less than their male counterparts.

The figure was released on 19 August by the Workplace Gender Equality Agency (WGEA), revealing the change that has occurred over the past six months on comparing men and women working full-time. WGEA also announced that ‘Equal Pay Day 2021’ falls on 31 August this year, marking the 61 extra days women have to work from the end of the financial year to
achieve the same annual pay as men.

There is evidence that the increase in the Gender Pay Gap reflects the ways women’s work has been hit by the pandemic and the support the Government has provided to male dominated industries such as construction in their economic response.

WEL has joined with the Public Interest Advocacy Centre and other organisations to call for review and reform of the NSW Anti-Discrimination Act, which we believe is no longer fit for purpose as it fails to protect women at work and in most public arenas. See the joint letter to the NSW Attorney General here

On 16 August WEL Coordinator Erina Finau represented us on an expert PIAC hosted panel to discuss reforms to the Act. She emphasised the daunting complexity of the current Act, difficulties victims have with making complaints and the need for effective Anti-Discrimination Legislation to be accessible and reflect the interconnected experiences of discrimination across such attributes as gender, race, culture class and disability.

WEL NSW is holding its AGM on Saturday 25 September at 2pm on zoom. Under WEL's Constitution the AGM will receive the Annual Report and the Treasurer's Report and conduct elections for membership of the WEL NSW Executive Committee, including office holders. A formal notice of the meeting will be sent to members in early September with the Agenda and 2020 AGM Minutes.

If you are a passionate WEL feminist with skills in one or a combination of communications, campaigning, political and policy analysis, fundraising, planning and risk assessment, administration, team leadership and management, think about  nominating for the WEL Executive for 2021-22.

Following the AGM there will be a short break, and then at 2.55pm a panel discussion Violence against women: national plan, local challenges. Jozefa Sobski, AM, will chair the panel. Jozefa is National Convenor of WEL Australia and a longstanding advocate on eliminating violence against women. We hope you will join us for the discussion.

We have been very fortunate that Kittu Randhawa and Hayley Foster have agreed to speak.

Kittu is the Founder and Project Lead of the Indian (Sub-Cont) Crisis and Support Agency, the first NGO for the Indian Subcontinent Community in Australia. Kittu is the subject matter expert in complex and cultural forms of family abuse and violence, specialising in dowry abuse.

Hayley is the Chief Executive Officer of Rape and Domestic Violence Services Australia. Hayley has over 19 years’ experience in the community and justice sectors, principally in the areas of domestic and family violence policy, practice and law reform. Hayley is passionate about evidence to action and social justice reform.

Following 10-15 minute talks by Kittu and Hayley, we will have questions and discussion. Both Kittu and Hayley are very knowledgeable and engaging speakers and the discussion is certain to be inspiring and informative. Please do join us!

Register your interest in participating by following this link. You will be sent a ZOOM link before the event.

Prof. Randell AO said she wished to encourage and recognise the efforts of WCEI members to make a social impact and improve the world around them in their spheres of influence in Australia:  ‘The annual Award is designed to honour these women WCEI members who are not only distinguished leaders of their enterprises but also contribute to improving the lives of others, giving sustained and selfless voluntary service and showing innovation in achieving lasting results’.

Menaka said that she felt ‘very honoured to be the recipient of the Award.  I understand it is in recognition of my work in social justice and equity issues for women, particularly CALD women (Domestic Violence, Mental Health, Migrant and Refugee rights, Diversity & Inclusion) and older women’.

As well as serving on the WEL Executive Menaka is a board member of the Indian Crisis & Support Agency and Older Women's Network.

Congratulations Menaka from all of us at WEL

We need your help. Our work is voluntary with pro-bono experts giving unlimited hours. We work in alliance with feminist and expert organisations and in conversation with the political process across the party spectrum. We need to fund research, databases, professional communications, and events for members and media.