With his passing, many tributes to Neville Wran have focused on his achievements in strengthening physical and environmental infrastructure. For many of us Neville Wran’s greatest achievement was leading the building of social infrastructure and social reform which led a paradigm shift and changed society for the better in NSW and, arguably, throughout Australia.

This social progress continues to this day.

For those working in the public service, the excitement and idealism created by Neville Wran’s leadership pervaded our work. He gave us the best years of our working lives. There were strong connections to community organizations and groups such as Women’s Electoral Lobby, National Council of Women, Business and Professional Women NSW, Women Lawyers Association, NSW Council of Social Services, Labor Women’s Committee, Immigrant Women’s Speakout.

Above all, there was a belief in the possibility of social reform and making strides towards achieving equality of the sexes and raising the status and standing of women. 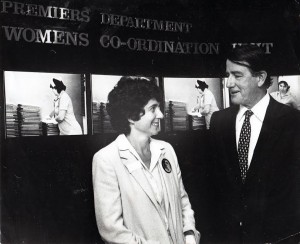 The TAFE Women’s Coordination Unit, for example, was established to encourage girls into trades as well as running women only courses for those returning to study or work from a period of child rearing.

The Women in Prison Task Force Report and Girls at Risk Report were far sighted and are still relevant today.

The Anti-Discrimination Act was passed in 1977 after a great deal of pressure from WEL NSW. It gave legal sanction to pursue and expose discriminatory practices and seek redress and reform. This law reform was followed by legislative changes introducing equal employment opportunity. Neville Wran sponsored significant packages of law reform on adult and child sexual assault and domestic violence. These were accompanied by state wide community education programs and well funded services.

The Women’s Advisory Council was established in 1976 to advise the Premier and there were many other inter-departmental and specialist task forces.

The Child Protection Council was established in 1985 and took the lead in implementing reforms for children, initially implementing the Government’s program to combat child sexual assault.

In those years, WEL’s influence was critical and substantial. Members of WEL were appointed to positions in various government departments and onto advisory bodies. Activists were part of the reform process. There was untiring advocacy in the interests of the most vulnerable and disadvantaged women and their children.

Neville Wran’s leadership and his personal commitment were crucial to the success of the decade coincident with the United Nations Decade for Women. The reforms achieved were systemic and far reaching. Sexual assault centres were opened in hospitals to augment the work of the NSW Rape Crisis Centre. The number of women’s refuges went from three to forty six with much of the funding from the NSW state budget. Child care funding increased substantially. Retention rates for girls in schools improved and girls’ enrolments in University course increased and diversified into fields like Law, Architecture, Medicine, Dentistry and Engineering.

On International Women’s Day each year, Premier Wran hosted a reception and announced major initiatives for policy reform and program funding. He was a champion of change to improve women’s status throughout his term. Though his approach in the early years was marked by a degree of moderation, Neville Wran believed in the power of government to lead social progress, systemically, gradually, but relentlessly.

Neville Wran was a moderate and a pragmatist. He combined these qualities with an acute sense of political timing, coupled with faith in the program being proposed and a preparedness to back it against any tide of criticism. He was supported by a Cabinet for which ALP ideals mattered.

Those working within government had satisfying work implementing the reforms and ensuring they were enshrined in public policy and practice.

Neville Wran’s contribution to a better, more equal society including through all the support enabling women to work with government, in our view, was paramount and of enduring importance.

He changed NSW for the better for all women and NSW led Australia in this program of social reform.

We offer our warmest regards to Jill and family and acknowledge Jill’s profound influence.