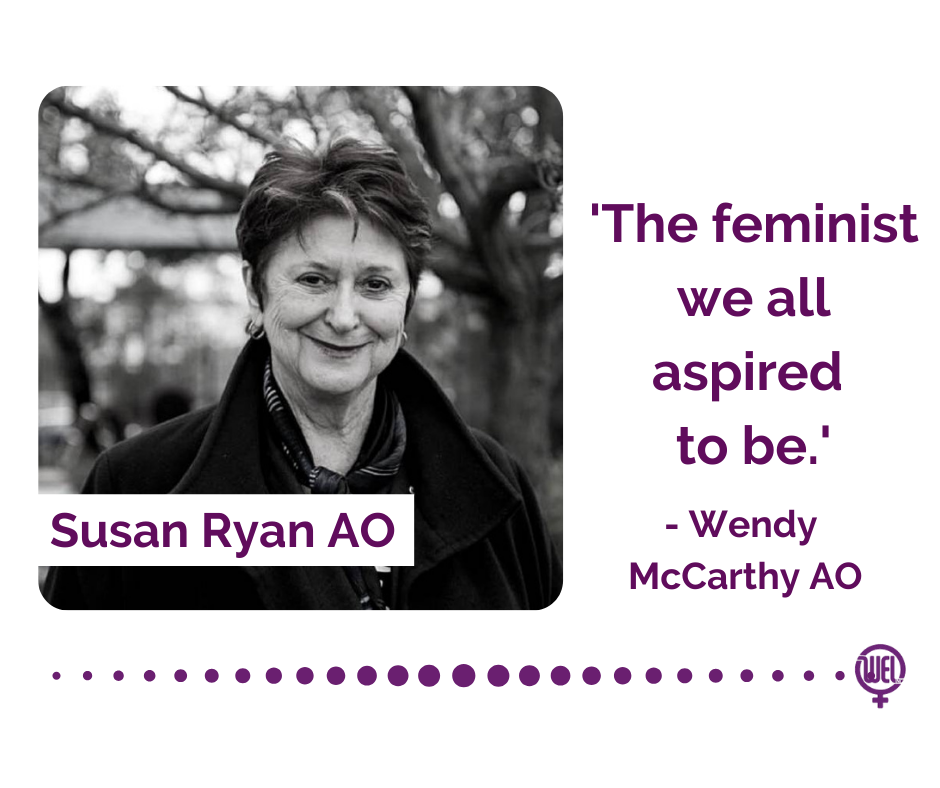 It is difficult to exaggerate the significance of the life of Susan Ryan.  She was a woman of her time determined to make the world a different and better place. She had a fierce intelligence and the courage to take on changing the system when she saw the need for change to improve the lives of Australians.

Her sudden death on September 27 came as an unbearable shock to those close to her as I was. We had been friends for nearly 50 years brought together by the feminist politics of the early seventies. We were cofounders of the Women’s Electoral Lobby (WEL) she in Canberra, and me in Sydney.

She was a significant player in WEL politics but what was so inspiring was that she pushed the ideals into realpolitik by putting theory into practice when she successfully ran for an Australian Capital Territory Senate seat for the ALP in 1975. Her campaign slogan was “A Women’s Place is in the Senate”, an abbreviation of the WEL slogan “A Women’s Place is in the House and in the Senate”. It was clever.

She had a remarkable group of WEL and other supporters who shared her triumph when she was elected in 1975 the International Women’s Year. Those supporters have remained loyal and constant over the years to the values they were endorsing.

We never doubted her integrity and capacity to represent us even if we did not belong to the ALP. We felt she was there for all of us and groups like Women into Politics grew their ambitions and encouraged others to follow her pathway.

She was unfailingly kind and helpful and encouraging to would-be candidates.

She wrote in her 1999 memoir Catching the Waves that she was driven by the view that women should be able to pursue opportunities unencumbered by stifling stereotypes. There should be no unfair obstacles put in the way of their achieving independence. Women and men should be judged on their merits, not on how far they reinforce some socially useful or commercially contrived norm”.

Not everyone agreed and it was a joy to watch her growing strength when she entered the Senate disappointed by the dismissal of the Whitlam government and often feeling very alone.

Her leadership of the Sex Discrimination Bill was outstanding and as the longest debate in Parliament we had time to observe her intellect, her debating skills and her tenacity despite the opposition of some residual misogynists in her own party. She just kept going - a mantra she encouraged in a recent interview about ageing and wisdom.

'No matter what – Just Keep Going'.

The Sex Discrimination Bill is surely her finest achievement and most significant legacy. The Bill outlawed discrimination on the basis of sex, marital status and pregnancy. Sexual harassment legislation was a world first.

She often reflected ‘it was probably one of the most useful things I have done in my life’. Many have tried to reinterpret or remove it but it remains the instrument of the law available to all of us. Its application has changed the lives of many Australians and forced organisations to change discriminatory employment practices and ignore sexual harassment at their peril.

She turned her energy and intellect to the Republican cause, feminism and social justice, human rights, education, homelessness especially for older women, and superannuation.

She was a loyal and wonderful friend, always the first to send a note of praise after a public event, even if you didn’t do it well.

She was loved by her children Justine and Ben, her partner Rory and her large extended family. She loved everything Irish. 'I benefitted by being born a Ryan and marrying a man born on St Patricks Day'.

She was the feminist we all aspired to be.

A State Funeral for the Honourable Susan Maree Ryan AO will take place at 11.00 am on Friday 23 October 2020 at St Mary’s Cathedral, College Street, Sydney NSW. To continue to keep the community safe during COVID-19, attendees at the State Funeral will be limited to Ms Ryan’s family and invited guests only.

Those unable to attend can live stream the service via www.pmc.gov.au/susan-ryan-funeral from 11:00am.

In lieu of flowers, the family has asked that donations may be made to the Prince of Wales Hospital Foundation in Ms Ryan’s name.

A condolence message for Ms Ryan’s family can be posted HERE and it will be collated with other messages into a hardcopy book, and presented to the family.