2022: A Historic Year for Australian Women

Women’s Electoral Lobby has ended 2022 on a high note.

Over the last six months the new Federal Government has undertaken an impressive range of initiatives to tackle women’s inequality. Almost every policy area in our Federal Election platform has seen legislation, inquiries and some practical commitments.

On 8 December Ged Kearney Assistant Minister for Health and Ageing announced the establishment of a National Women’s Health Advisory Council with a broad remit including ‘assessing the accessibility and affordability of sexual and reproductive healthcare, opportunities to reduce clinician bias through workforce education and improving the health literacy of women and girls.’

WEL especially welcomes the 2 December passage of the Fair Work Legislation Amendment (Secure Jobs, Better Pay) Act 2022. The new Act introduces measures to address the gender pay gap by putting gender equity as an objective of the Act, prohibiting pay secrecy and establishing new Expert Panels to inform the FWC's consideration of work value and pay equity in the Care and Community Sector.

Under the Act, sexual harassment in the workplace is expressly prohibited and a breach of this prohibition can result in claims and civil penalties. Separately, the Anti-Discrimination and Human Rights Legislation Amendment (Respect at Work) Act 2022 introduced a positive duty for employers to take reasonable and proportionate measures to eliminate unlawful sexual harassment, which requires employers to significantly step up their current sexual harassment risk management practices.

A big thank you to all the members and friends who on Saturday 10 December came together to hear Minister for Indigenous Australians Linda Burney’s inspiring address at our AGM.

The Minister set out the case for a Yes vote in the planned 2023 referendum on the Voice to Parliament. She traced a long journey from the 1967 Referendum (when she was only 11 years old) which recognised Aboriginal people as citizens, to 2023 when the referendum will ask Australians to constitutionally recognise and hear Indigenous Australian’s voices on issues that involve their lives and communities.

She explained how a constitutionally enshrined Voice to Parliament would enable Indigenous women’s voices to be heard on ways to alleviate extreme deprivation in areas such as housing and even access to clean water in remote communities.

The Minister talked about the importance of women leading ‘kitchen table conversations’ and local reach outs to increase community understanding of issues at stake in the referendum.

WEL founder and Ambassador Wendy McCarthy AO introduced Linda and highlighted ways that WEL could consider supporting the referendum. WEL Australia Convener Jozefa Sobski responded on WEL’s behalf. Both committed WEL to campaigning for the Constitutional Voice to Parliament in 2023. 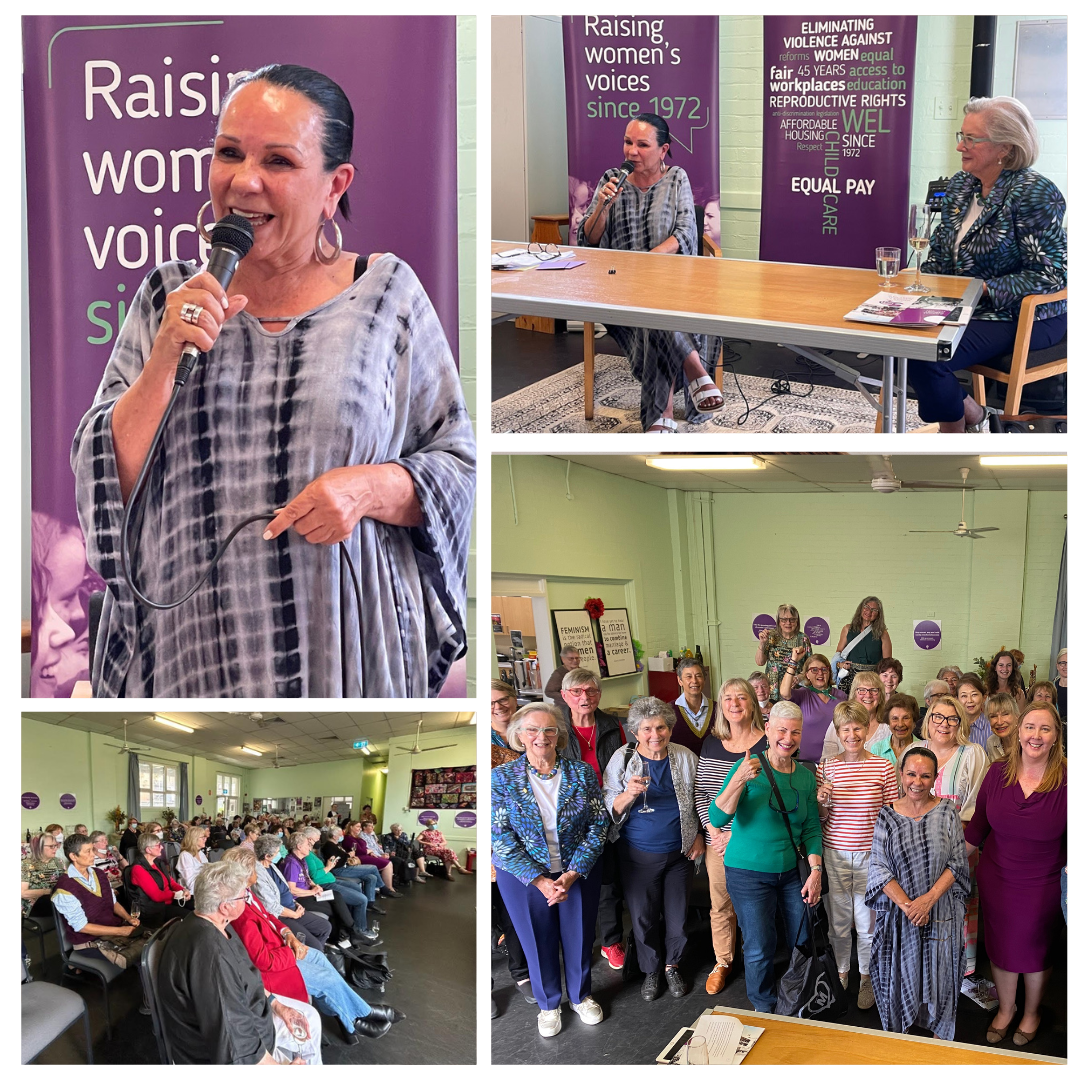 A Toast to WEL’s 50th Birthday

Following Linda’s address Wendy McCarthy proposed a toast to WEL and the room raised glasses. We celebrated the wonderful synchronicity of the 2022 election where women’s policy demands drove the outcome and the 1972 election where women first emerged as a progressive force in Australian politics.

WEL would like to thank Q Station Manly, the Sydney Festival, and Gleebooks for their generous donation of prizes as part of the fundraising raffle we ran during the celebration. 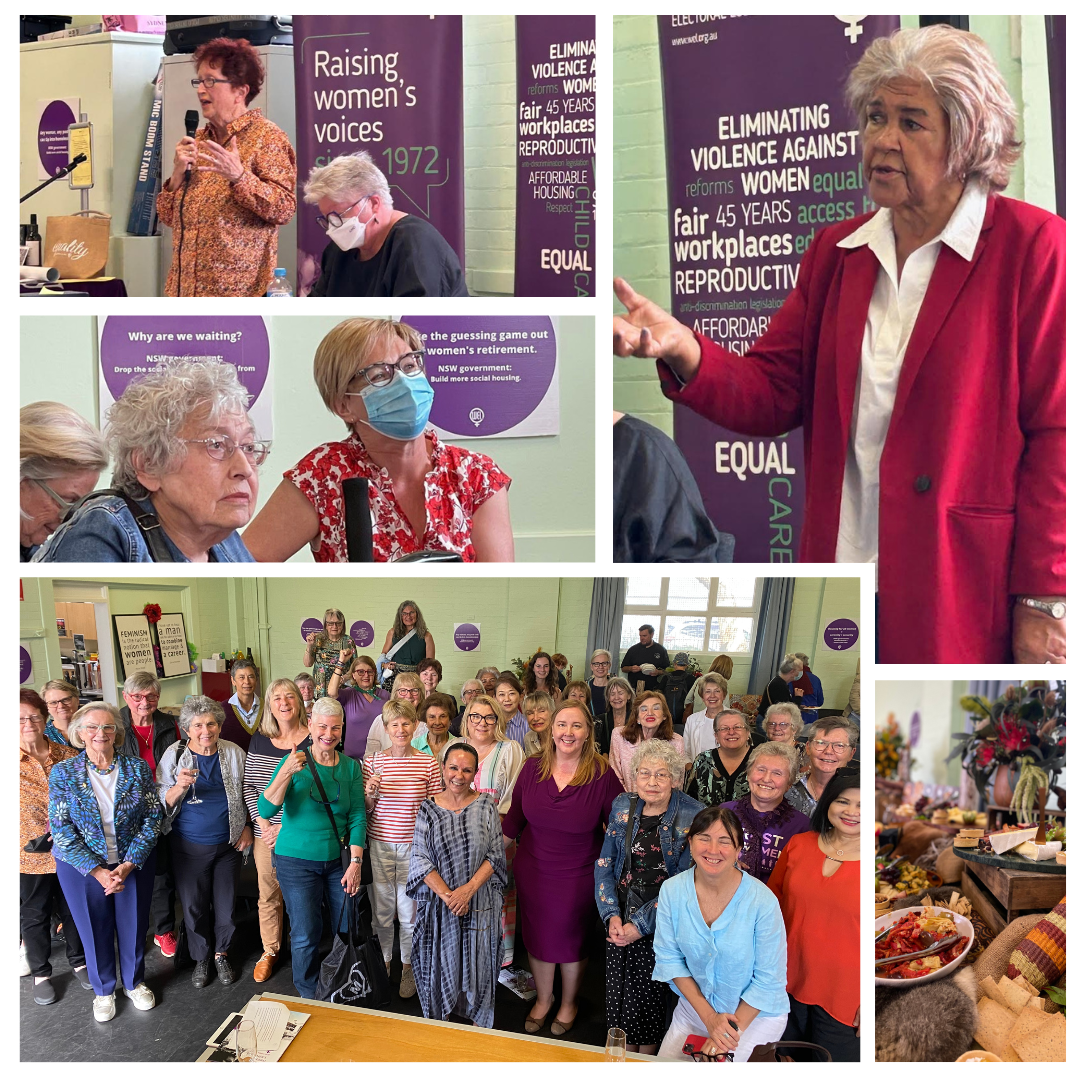 WEL and the Whitlam Anniversary

WEL attended a NSW Parliament House celebration, hosted by Rose Jackson MLC, of the 50th Anniversary of the Whitlam Government’s removal of the luxury tax on the pill. Historian Michelle Arrow made a wonderful speech at the event acknowledging WEL’s role in that and other transformative Whitlam Government decisions.

What we’ve been working on

WEL made a submission on the Treasury’s recent Employment White Paper. The White Paper will build on the outcomes of the Federal Government’s Jobs and Skills Summit, including ways to enhance women’s economic participation and equality.

WEL is also preparing a submission for the Senate Inquiry into Universal Access to Reproductive Healthcare.

We are currently planning our 2023 NSW Election platform, candidate forum and scorecard.

We thank retiring Executive Committee member Philippa Hall for her hard work and leadership since she joined the Executive Committee in 2014. A founder of the National Pay Equity Coalition in 1988 Philippa has led policy development and campaigning on pay equity over many decades. Philippa was WEL Convener for 4 terms and led the development of our 2022 Election Policy Platform - one of the most comprehensive platforms for women’s equality since WEL’s foundation

WEL also thanks Jane Sharkey who is retiring after 2 terms on the Executive. An expert on regulation, Jane made significant contributions to our planning and decision making processes.

We are a voluntary not for profit, completely dependent on donations to fund campaigns

Any donation, no matter how small, helps us continue our work advocating for equality and justice for all women. 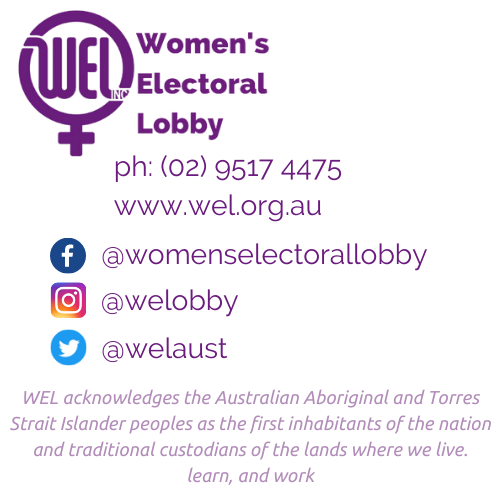