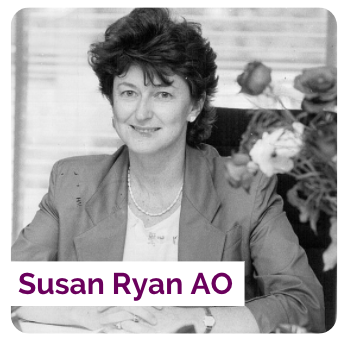 Susan Ryan helped 'change the world' for the women and girls of Australia.

When Susan Ryan started school (late 1940s), there were things that girls were told they could not do. Maths, science, law, engineering, architecture or accounting. They could not aspire to general management, leading a Department or continue working after they were married, let alone dream of one day entering parliament.

Susan’s generation came of age in an Australia where Government, the law, workplaces and even the institution of marriage and the family were increasingly out of kilter with growing aspirations for autonomy, independence and a fulfilling life.

After the first heady rush of Women’s Liberation she understood that Australian women needed to marshal the power of Government to translate her generations’ dreams into practical changes to enable women to work, study, love, earn, and control their own lives equally with men.

This meant women had to become 'masters' of democratic politics and processes, policies, parties, lobbying, elections, campaigns and summing up demands in memorable slogans and 'memes'. To this end Susan and other members of the women's liberation movement, founded the Women's Electoral Lobby (WEL).

'We formed the Women's Electoral Lobby in the year leading up to the election of the Whitlam Government in December 1972. WEL utilised shock tactics, the media, persuasion, and a bit of psychological terrorism, to get issues like child care, equal pay, reproductive control, and access to education and training, on to the agenda of the newly elected Whitlam Government... That short and intense period where the Women's Electoral Lobby became an effective part of the 1972 election campaign determined my parliamentary career.'

WEL’s 1972 campaign helped disrupt the parameters of Australian election campaigns. Susan used lessons from the campaign to hone her own plans to take women out of the home and into the House. From shared experiences in WEL and in the Party she chose to join, she observed the practical ways that government policies and even operations failed to deliver for women. She concluded that not only was a woman's place in the House and in the Senate, but a feminist's place was in politics.

Susan would go on to become the first female Labor government cabinet minister, in the government led by Bob Hawke. In Hawke's cabinet Susan was appointed Minister assisting the Prime Minister for the Status of Women (from 1983). In this role Susan was notably involved in the creation of the Sex Discrimination Act 1984 and the Affirmative Action (Equal Opportunities in Employment) Act 1986.

A trailblazer in the true sense of the word, Susan was not only a woman in Parliament (shocking enough at the time), but as Susan relayed to Parliament in 1992, "Even more remarkable than my female presence in the Senate, I was a feminist."

In her tribute to Susan, Wendy McCarthy AO says not only was Susan a loyal and wonderful friend, she was the 'feminist we all aspired to be'. Wendy and Susan were friends for nearly 50 years, after the two were brought together by the feminist politics of the early seventies, and their involvement in founding WEL.

Susan understood the centrality of economic and budgetary policy. Her central objective in Parliament was economic independence for all, including women. In Susan, women and girls not only saw someone in Parliament who spoke out about the discrimination and inequality that they experienced, they saw a woman actively working to change the status quo by using key instruments of policy and legislation to do so.

As Minister Assisting the Prime Minister on the Status of Women in 1984, Susan authorised the preparation within the Office of Status of Women, of a detailed Women's Budget document. The Gender Lens remained an integral part of the Federal budget until the Abbott Government discontinued it in 2014. Since then feminist policy experts around Australia have undertaken the task with the leadership of NFAW. Susan generously contributed to this process to hold Government to account on behalf of women. It’s potency has grown over time.

Susan Ryan was a truly extraordinary, feminist leader. She blazed a path for all of the #crediblewomen who call out inequality, imbalance and discrimination - in the Budget and economic policy - and anywhere it arises.

Much has changed during Susan's lifetime. A third wave of feminism has crested. Thank you Susan, and fare-WEL.

A tribute to Susan Ryan AO, by Wendy McCarthy AO