Welcome to the Women's Electoral Lobby. For information about WEL's Federal Election Campaign visit this page.

Women around Australia listened to the Liberal National Coalition Party Campaign Launch on Sunday with hope. Our hopes were dashed. There are just a few days left for Malcolm to make good on his promise. WEL calls on you to send a message to the Prime Ministser, Senator Michaelia Cash and your local member to fund women’s refuges.

In his launch speech the Prime Minister talked of the right to live without fear of violence  and that his first announcement on becoming Prime Minister had been on eliminating violence against women.

Was it about funding for women’s refuges and Front line services? No

It was a $64m commitment to crack down on the trafficking of illegal firearms by criminal gangs. Good but not much use to thousands of women and children fleeing domestic violence and needing shelter.

In May, Women’s Electoral Lobby (WEL) wrote to Prime Minister Turnbull asking him to commit $1billion over 5 years ($200m p.a.) to theWomen and Children’s Safety Program (WCSP), to provide women’s refuges and other front line emergency support services for women and their children escaping violence.

The Commonwealth contribution to WCSP would be $200 million a year, or just 2 cents a day. To highlight this, WEL launched its #my2centsworth campaign, asking people in the community to urge political leaders to spend the 2 cents a day needed to fund women’s refuges and other frontline services.

In his letter to WEL on 15 June 2016, Tony Nutt (National Campaign Director for the Turnbull Coalition  Team) wrote that ‘The Coalition will make further announcements about specific funding for domestic Violence initiatives, including frontline services, before the election.’

Last week there was a Liberal media release saying, ‘The Turnbull Coalition is resolute in its commitment to ensure women and children are safe in their homes, safe on the streets and safe online.’

This $15m announcement was detail about part of the $33.3 m ($100m over 3 years) already announced in the Federal Budget. It will go to the 1800RESPECT helpline; a housing innovation fund to provide safe accommodation for women and children; financial counselling and capacity building and access to microfinance; and innovative and collaborative service delivery between specialist family violence service providers and health and social services providers.

Not good enough from our feminist Prime Minister.

Compare this to the commitments made by the Australian Labor Party (ALP), The Greens and the Nick Xenophon Team (NXT).

The ALP Information Services Unit advised: Labor’s new Safe Housing For Women Program will increase the number of refuges specifically available to women and children fleeing domestic violence and will provide funding for support services that help women to stay safe in their own homes, as well as support specialist women’s services. 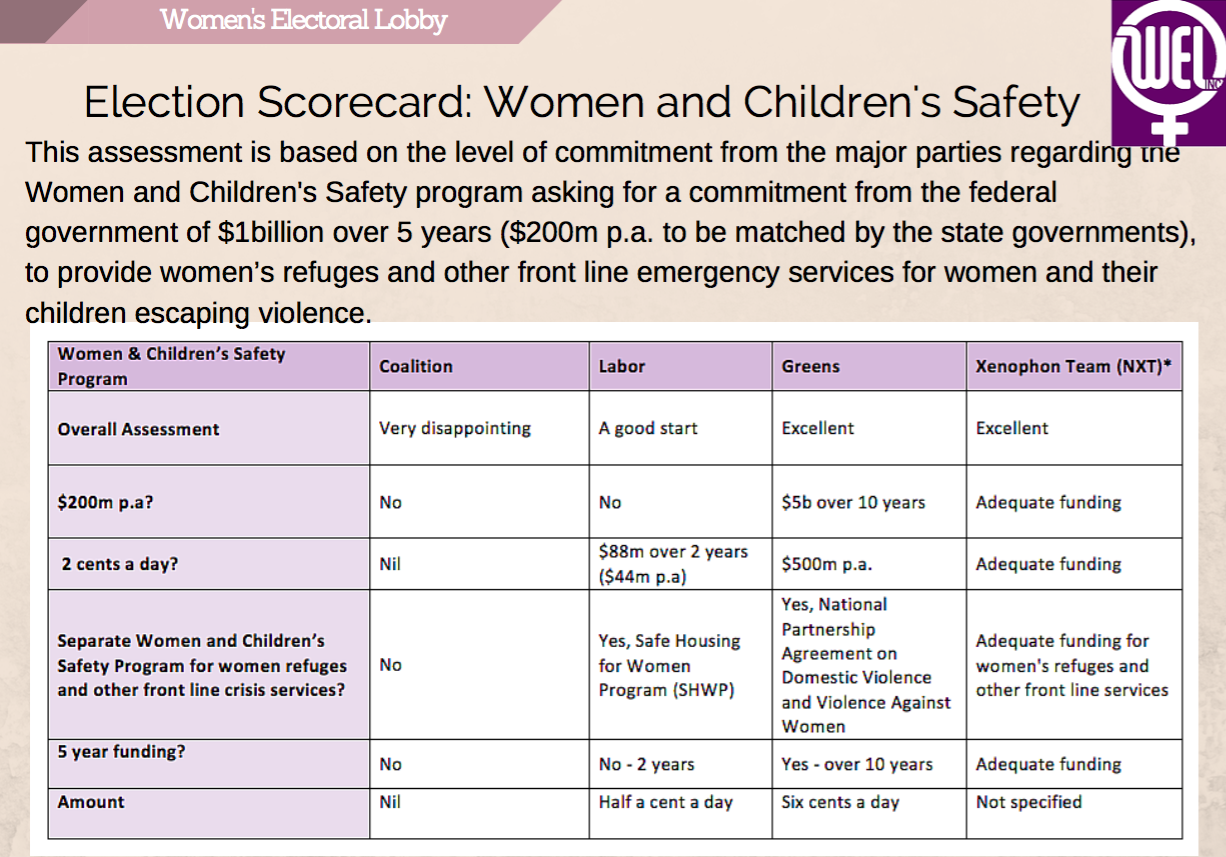 *WEL will have discussions with Nick Xenophon Team after the election in relation to what priority NXT will give to funding the Women and Children’s Services Program.

Here's WEL's latest media release with an update on the campaign.

Responses received from the political parties:

Women's policies released to date by the parties:

How you can help

WEL CALLS ON YOU to send a message to the PM, Senator Michaelia Cash and your local member to fund women’s refuges.

If you have not already, please Take the Pledge and urge the party leaders to agree to spend just 2 cents a day to fund WCSP.  Please ask your members, your friends and everyone you know to join in this vital life-saving campaign.

#My2centsworth campaign will continue until the funding is firmly committed by the incoming government.

Send messages of appreciation to political leaders whose responses you are happy with.

Here are some actions you can take to help spread the word and put pressure on politicians:

Make a video on your mobile device and upload it to social media using the #my2centsworth hashtag.

"I'm taking the pledge. To keep women and children safe, I want the government to pay my 2 cents a day."

Tips: Make sure your camera operator (person holding the mobile device) is close enough so that your face is well placed in the frame and the audio can be picked up clearly.

Tweet the leaders: Thank them for their promises and ask them to do better using the hashtag #my2centsworth and mention @welaust

Please commit to funding WEL’s Women and Children's Safety Program. I want the government to spend my 2 cents a day to keep women and their children safe.